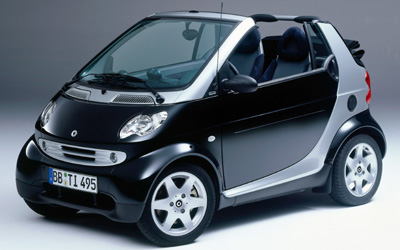 I put down my $99 to reserve the right to purchase a Smart Car. We saw these five years ago when we were in Paris. They were traffic stoppers and head turners even among the Parisians. Of course they were new to the market then.

I expressed my interest to buy a Fortwo Passion Cabrio red over black with black interior (like the one in the foreground above.) There is no guarantee that I will get what I want. I can get my $99 back, or take what they have to offer.

It’s a totally useless car for anything but hauling two people. No back seat, storage space for maybe a couple of six packs – or two liter bottle of Perrier.

And let’s talk about the Fortwo Passion Cabrio – heckuva a name, huh?

Europeans have been driving these fancy carts for years, drivers in the U.S. couldn’t get their hands on one. I’m not sure exactly where the red tape started, but the car got totally wrapped up in it.

You could buy one in the U.S., but it had to be specially imported and modified to meet all the safety and emissions standards.

Daimler-Chrysler owns Smart and it only took them five or six years to decide that the U.S. market could handle a cute, little, gas efficient, city scooter.

Then they couldn’t decide who would sell and service it. Turns out Roger Penske and Dr. Z made a deal for the rights.

It won’t be available until the first quarter of 2008 (they say.)

I figured I could tie up $99 until then. Better that than look back and say “I wish.”

Edit: Pat Detmer has some great names for cars with reasons why the name works.

• Madonna — comes with a leather interior.

• Vigoda — NYC police car that looks like it’s been in a bad accident.

• Polenta — what is this stuff, anyway?