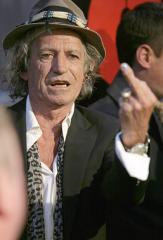 Keith Richards had America talking – for about 24 hours, when he said he snorted his Dad’s ashes along with cocaine.  Then he said it was all a coke joke, and the world moved on to Imus and DannieLynn.

So where does that leave the parent huffers?

I case you hadn’t figured it out, snorting your parents isn’t a really good idea.

Slate’s Explainer says it probably won’t kill you – as long as you don’t do it too often.

So I’m guessing, OK to inhale Mom and Dad, but stay away from Grammy and Gramps,  stepdads or stepmoms.

Are you worried that you might get a piece of femur in your throat?

His father’s body would have spent a few hours in a 1,400- to 1,800-degree cremation chamber, and then the ashes would be run through a processor, like a giant blender, to give them a uniform texture and smooth out any remaining bone fragments. Magnets help remove any metal objects—like surgical pins or shrapnel—from the ashes.