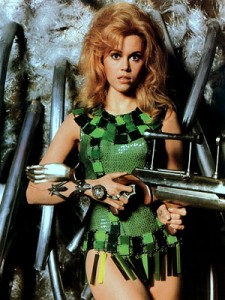 Finally! A remake to appeal to boomers. Barbarella will be remade to screen in 2008. I know I’ll be disappointed because of the difference in hormone levels between 1968 and now. The strip scene in the opening credits was worth the price of admission at today’s prices, let along 1968 ticket prices.

This was a drive-in favorite too!

As I remember some details, I’m surprised that the recliner thingy hasn’t made it to market. OTOH, maybe it has and I just don’t know about it.

The first producer Dino De Laurentiis had this to say:

“Barbarella” is a world where you are completely free to unleash all your fantasies, creativity and imagination — where the possibilities are limitless,'” commented Robert Rodriguez. “I love this iconic character and all that she represents, and I’m truly excited by the challenge of inviting a new audience into her universe.”
“Barbarella is the ultimate science-fiction adventure heroine: smart,
strong and sexy,” said Dino De Laurentiis. “In our vision, the future is
female, and I can’t wait to introduce ‘Barbarella’ to a new generation of
moviegoers.”

Fonda was directed in the movie by Roger Vadim, one of her husbands. I don’t remember which. 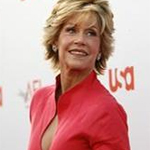 At least in her own mind, Fonda thinks she could still play the part.

I say, let’s give her a shot. At least an audition – something that could be posted on Youtube.

UPDATE: Rumors are flying that Halle Berry will be the new Barbarella. That sounds about right, get an Oscar and cash in with the boys (of all ages) as Barbarella.  Smart woman, that Halle.