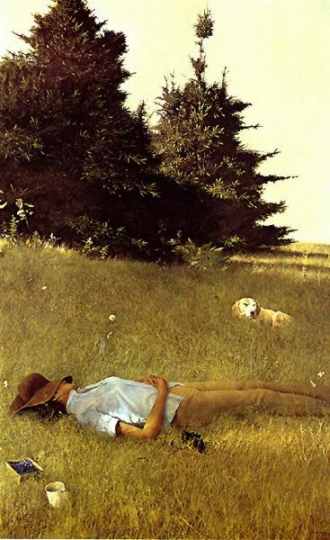 This is my favorite painting.

We had a distant thunder that turned into a full blown summer thunderstorm blowing down half a tree onto a power line.  So our part of town was without power which meant no innerweb!  No problem, I have a converter that will run off the car lighter. So I figure I’ll just sit in the car and surf the web. A/C and everything.

As I was climbing in the car, I broke off my USB wireless connector.

Nothing else to do, so I figure I’ll run to Best Buy.  HORRORS, they had no power either so they were closed.

Staples! Yes! And since I always hated that little USB thing hanging off the laptop, I upgraded to a wireless card.

And of course on the way home I realize – duh – no power, no wireless!

Now the whole time, my wife is sitting in the recliner in the semi-dark just relaxing.

I tried to convince her that she would be more comfortable in the car with the a/c, but she said she was fine.  “I’m going to watch a DVD” I said. “Go ahead,” she said.

Chose The Big Lebowski, took it to the car, slid it in the laptop and got a message from Bill Gates and the RIAA that said they couldn’t check my analog something or rather and it wouldn’t play.

So I’m back in the house, telling her that Bill Gates was a prick, and I was going to get Akio Sony to help me. She bought me a Sony DVD walkman. So I take that to the car. Of course I had the wrong power cord. Back in to get it, just in time for hear her talking to her third favorite man, the Pizza Hut guy. (Her second favorite man is her massager.)

I got the right cord, plug it in, fire it up and no sound!  Of course, no earphones.

So I’m back inside, and asked her which would happen first: I get DVD playing, pizza guy comes, or the power comes back on.

Of course, I’m back in the house to get my share, back out to the car, get video going again and about 10 minutes into the worst movie I have seen to date – Corrupt – the lights in the house are on!

OK, nerd vision: I have my large noise canceling earphones around my neck, the Walkman, the laptop, and two power cords, the DVD and install CD in my hands.

Obviously I am so not a techno-nerd, but I sure looked the part.