Need a dog to unstuff a fiber filled toy? Tear apart a tennis ball? Eat wicker? Tear apart a rubber toy? I have three, and probably a fourth when she gets real teeth.

Unlike other people’s dogs who fulfill their civic responsibility to the community by serving as therapy dogs, ours just harass friend and foe alike by barking, jumping up, licking, and running around like hyenas.

Our daughter has a red-golden retriever, named Ferguson, as in Maynard Ferguson, because her husband is a trumpet player. Their other dog is Chase, after Bill Chase, yes they did have a dog named Bill.

Anyhoo, she decided that putting Ferg through therapy dog school was something she wanted to do. Since they live a couple blocks from a major hospital it was easy for her to walk Ferg over for classes. He passed with flying colors and is now a full fledged therapy dog. Has the vest and everything 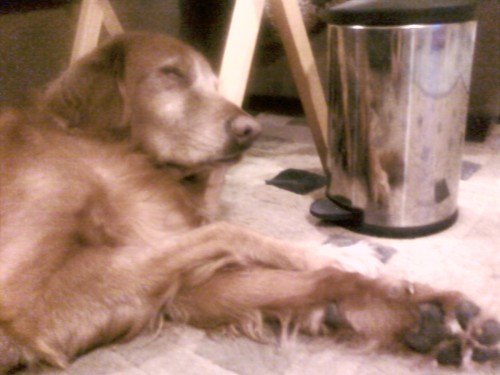 They go weekly to the hospital and usually make the rounds with a couple other dogs. My daughter calls it “going to school.” Ferguson is a pro now. He knows to go up to the bed and put his head near the patient’s hand. He’s usually pretty pooped pup after going to school. Actually, I think they both nap.

Boomer Chronicles also has a therapy dog that works with Alzheimer’s patients.

The Columbus Dispatch has a great story about therapy dogs working with kids in school. I think this is a very cool deal. What kid doesn’t love dogs and dogs love kids back no matter their status or background.

The story is about Boomer (love it!)

When he’s at the Worthington elementary — joining hamsters, guinea pigs, gerbils and fish — he’s on a mission to lift the spirits and soothe the emotions of angry, stressed or depressed students.

In brief, Boomer is a professional pal.

Of course, they were concerned with kids with allergies, but once the program was explained to parents, there were no problems and have been no complaints. Can you imagine being the parent that got Boomer expelled?

Our dogs just give us unconditional love. So why has i can has cheezburger soared to the top while dogs with cones lingers at the bottom. I guess that’s another blog.

Meanwhile, we’re still busy trying to housebreak our dogs. Maybe a sentence of community service is just what the delinquents need.

Here’s another source with good info:

National Council for Aging Care’s guide on Pets for Seniors: