Twenty five years ago, fire departments started to make the switch to lime green vehicles instead of the traditional red.

Lime green experts proved were the most visible.

Thanks to extensive research by such men as Dr. Stephen Solomon, an optometrist and a member of the Port Jervis, N.Y., volunteer fire department, more and more fire chiefs have been made aware of a stark physiological fact: people are red-blind at night.

Red is dead. Lime yellow is the coming color.

Our fire department and all the ones around us are still using and buying red fire trucks. Traditions are hard to break, even in the spotlight of science. I don’t understand a fire chief that retains tradition when changing could avoid a potentially deadly accident because a motorist didn’t see the fire truck coming.

I think they’re great,” said Gilbert police Sgt. John Lyle. “They grab people’s attention. For me, personally, it does have some historic value. That’s what I grew up knowing as a police car.

“There’s no doubt when people see a black-and-white car, they know what it is.”

I personally think a Dodge Charger with the police package is the most intimidating looking car. 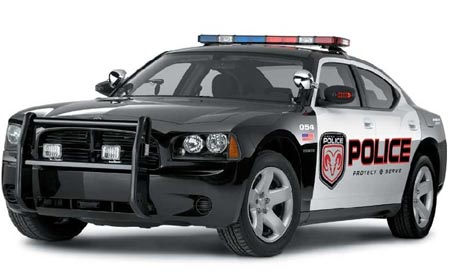 I want cop cars to be intimidating to criminals.  Sometimes image is everything. Too bad some of the cops that drive these cars aren’t as intimidating because of their build: too small or too large.