I don’t know if that’s a hand-basket, but we are all going to Hell.

M&M with peanuts is a standard. It’s not appropriate, but certainly acceptable if for no other reason than they have been around a long time. Tradition and heritage counts.

Seems that dark chocolate even survived the grueling test of the marketplace.

So far I haven’t noticed the dark chocolate infringing on the shelf space for the real M & M’s. Mini’s are hard to find, and that’s fine. Large don’t get much shelf space either. When things change regarding these interlopers, you will know about it.

BUT– and this is huge. Who in H – E – double hockey sticks decided raspberry flavored milk chocolate should be inside the delicious candy coated shell?

M&M’S(R) Razzberry Chocolate Candies, which offer the sweet flavor of raspberries as a delightful complement to the classic M&M’S(R) milk chocolate taste.

Here’s the poor schlub that has to make this sound like a good thing.


Fortunately, the geniuses on at Mars have designated a “season” of six weeks, peaking in September and October.

I hope they don’t show up on shelves in this area. I will not be responsible for my actions. 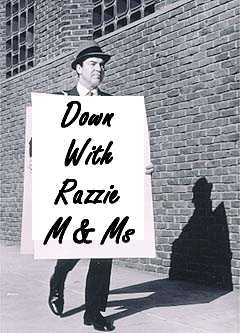