Mental_floss (I find I’m spending a lot of time there) has a cute little quiz where you match up the TV family with the sex talk conversation.

Here are a couple random conversations that match families listed above. Which do you think they belong with? 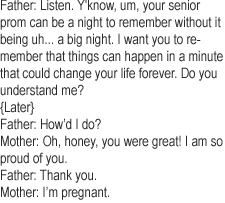 I don’t know the answers!

However, I don’t remember getting the sex talk when I was growing up. I got most of my information from credible sources: other guys my age, pron and Playboy (there is a distinction we can discuss later.)

We have two daughters, and I wasn’t involved in the sex talk with either of them. As a matter of fact, I’ll have to check to see if my wife was involved.  However, I do remember a time when my daughter was busted for having sex by her best friend – our sheepdog.

One day good old Dudley dragged a contraceptive sponge out from somewhere. Since I had the old snip-snip we didn’t have contraceptives in our house.

Good old Dudley. When I informed my daughter of what he had done, we both had to smirk a little that Dud was the narc.

She ended up pregnant, but not until a few years later, and by a different guy.