O fer gawd’s sake, they have opened the crypt and released Walter Cronkite to appeal to the “retirement crowd.”

Look at this sad old man: 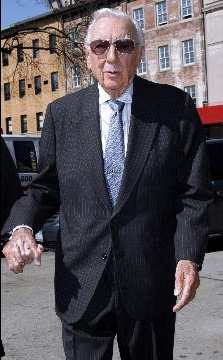 He’s holding the hand of a man next to him on the way to the funeral of a friend. That’s sad. Stay retired Walter.

Cronkite will return to TV on the new Retirement TV channel.

The channel is geared to viewers 55 years old and up and is currently available in 28 million U.S. homes through Philadelphia-based Comcast Corp.’s cable systems and satellite broadcaster DirecTV, based in El Segundo, California. The network’s current eight hours of daily programming is schedule to expand to 24 next month.

You were the man that defined network news in a classy way. You were are the most trusted man in television. Leave it. Don’t become Larry King.

You were excited, speechless, with tears when man first landed on the moon. I don’t want to watch your frail shaky body and listen to your weak voice deliver news and/or commentary.