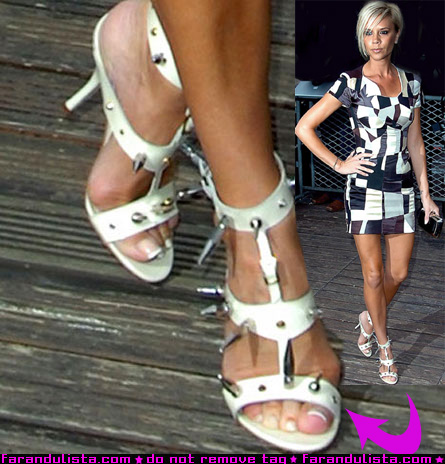 They both have bunions.

Bunions are the boney growth on the outside of the big toe. The arrow in the picture above should be pointing to the bump on my bff Posh’s foot. They grow and push the big toe into the other toes and are very painful and make it difficult to walk that model strut that my wife likes to do around the house. She can still wear the shoes because she thinks it takes people’s eyes off her bunions.

The singer-turned-designer has told friends that her bunions are now so bad she is seriously considering having an operation to remove them.

The scale of Victoria’s painful bunion problem was laid bare recently when she was snapped in a pair of spiked Mulberry sandals. Now a friend of the former Spice Girl tells me: ‘Victoria has had enough of having bad feet and has made some early-stage enquiries about having her rather unpleasant bunions removed.

Friday was surgery day for my wife. She was the first operation of the day by Dr. Charles Emerson Winchester III (we’re watching the M*A*S*H* reruns) and she was glad for that. To the operating room by 6:45 and out of the hospital by 11:00. First day was easy she says because the good doctor numbed her foot.

Friday was not good. During the night she developed itching – an allergy to the Hydrocodone. So she switched to Armour-all, or something like that. The itching stopped and she has a nice sheen. Later today I will be on the corner offering the Hydrocodone to the poor souls in pain. I think $20 a pill is the going rate around here.

This morning she woke up hocking up loogies that would make any 10 year old proud. We called our private nurse Joanne (a boomer nursing student friend) for a house call. She listened and said she had some wheezing and needed to be on an antibiotic.

The good doctor came through again, prescribing an antibiotic – Zataran X I think it was.

When I told her that she and Posh had something in common, she wasn’t impressed. She said “I’m not having the other one removed, unless today is a really good day.”

‘They are causing her a considerable amount of pain, so much so that she thinks the only thing to do is to have surgery. She knows the operation is unpleasant and she will be out of action for a while, but she thinks it may be worth it. “

Like my wife, she has had a bunion as long as she can remember. Don’t blame your shoes …

… it would be more accurate to blame your parents (they are such excellent scape goats aren’t they). Bunions are most often caused by “faulty foot” structure that is an inheritable trait. Certain foot types increase the risk of bunion growth, although ill-fitting shoes can and do worsen the pain, but they are actually caused by a change in your bone’s structure.

Since we on the subject of footsies,

What do aging feet look like? Allow me to paint a word picture. Toes start to curl. Tendons start to tear. Arches start to fall, and the foot becomes longer and wider. Nails thicken and crumble as toenail fungus becomes commonplace. The skin hardens and more calluses develop. In some cases, toenails become longer and untrimmed because of the loss of flexibility to reach them. The fat pad on the bottom of the foot thins and the feet often have a more boney appearance.

We gain weight which stresses, joints, ligaments, and tendon damage and also causes poor circulation which can lead to foot ulcers. If I could see my feet, I would probably be more concerned.