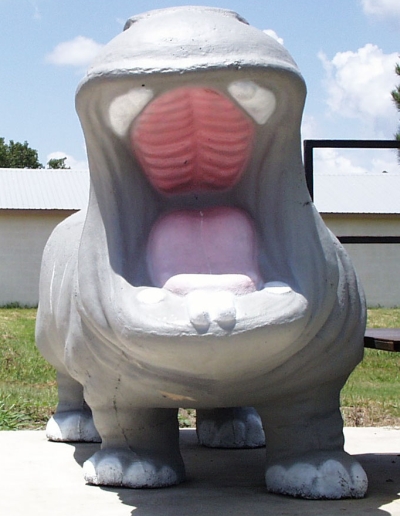 Ron at IRememberJFK.com grew up in Miami, OK and recalls when the circus would come to his town.

Yet we were treated to circuses that would pass through town every year, as far as I can recall. They were HUGE, at least in a child’s memory, because they had three rings, just like Barnum and Bailey!

These circuses also created some legendary moments for these small towns.

Hutto, Texas is the home of the Hutto Hippos.

In 1915 a circus train stopped in Hutto at the depot to take on passengers, pick up mail, water and fuel. A hippo decided nearby Cottonwood Creek was too inviting to resist.

The depot agent telegaphed Taylor and Round Rock the nearest stops up and down the line: “Stop Trains, hippo loose in Hutto.”

The hippo was rounded up and safely loaded back on the train.

In 1923, the Hutto High School adopted the hippo as its mascot.

If you eat too much at the Texan Cafe, you too can become a Hutto Hippo.

Wabash, Indiana was a small town where an elephant provides some local color.

The Great American Circus visited on November 11, 1942. While the elephants were waiting to perform, some dogs harassed them and Modoc the elephant broke free.

The elephant chased a woman into a drug store. I mean, the elephant went into the drug store too! The elephant had his way with the woman before losing interest and backed out the hole it made when entering. (edit: hole in the building that is.)

It later decided it had enough fun and calmly walked onto the rail car that was its home.

Jack Webb enters the blog to tell this next tale.

The place, Oquawka (O-kwah-ka), Illinois on the banks of the Mississippi.

A different story than most.

Norma Jean the elephant was part of a circus.

She was safely shackled to a tree for the night.

The next morning she was dead.

I was working Pachedyrm Patrol out of the three-four.

My partner was Lucy. His real name was supposed to be Lucky. But a typo made him Lucy.

Seems Norma Jean was shackled to the tree with a chain.

Thanks Jack and Lucy.

A dead elephant in the middle of the town square with no way to dispose of the body. One of the great thinkers of the area decided they needed to bury Norma Jean right where she dropped.

Today, Oquawka boasts of not only access to the Mississippi River, the hometown to a British Open Champion, but also is the final resting place of Norma Jean.

If I know of three circus animals that escaped in small towns, I’m sure Ron will come up with a bunch more if he put his mind to it.