You remember Ken. He was the Jeopardy champion that finally got so sick of Alex Trebek that he threw the game? Even the piles of cash couldn’t keep Ken from wanting to punch Alex’s moustache off when he gave one of his “I know the answer and you don’t” reading FROM THE ANSWER CARD.

I’m poking around the blogs one day on a whim looking for famous people to add to my blogroll because I thought it was damn clever of me.

Erin, Jane, Mark and Ken were all I could find that blogged regularly. Others tend to guest blog on Huffington Post.

They are all in my RSS, but the only one that resembles an “every-man” blog is Ken.

So here’s what I have learned about Ken, and consequently are the reasons I really resent him.

1. He’s a nice guy – did a mission overseas and married his college sweetheart. Yuck.

…moved back to the States to attend the University of Washington for a year, and after putting school on hold for a two-year Mormon mission in Madrid, Spain, transferred to Brigham Young University in 1996. At BYU, he double-majored in English and computer science, and graduated in 2000 alongside his then-fiancee Mindy Boam, whom he married that fall.

2. He really seems to enjoy his kid Dylan – he writes a regular bit involving his son. He also has a daughter who I guess must be the slow one in the family.

Bewildering Conversations with a Four-Year-Old returns! Dylan, in the car the other day: “Yowch!!!” Me: “What happened, guy?” Dylan: “I bit my tooth!” That takes some doing.

“Why do Daddy’s pants say, ‘Cave Ken Jennings’?” he asked Mindy last week when we were at a Dodgers game.

“That says ‘Calvin Klein Jeans,’” she had to tell him.

But if I ever start up a vanity fashion/fragrance line, it will definitely be called “Cave Ken Jennings.”

Very longtime readers may remember that, way back in the mists of time, I started an alphabet mural on the wall of my baby daughter’s room.

Luckily I don’t have seasonal affective disorder or anything. So which do you think came first, the name or the suspiciously fortunate acronym (SAD)? All psychological problems should be named this way.

5. He’s humble. He won some gigantic trivia challenge in Europe and in addition to a pile of money he got a nice crystal bowl. He feeds his dawg out of it. 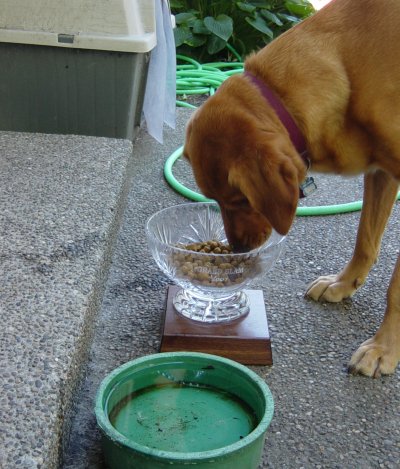 I mean, come on, how can you not really, really resent a guy like that. Here’s one thing: he doesn’t allow commenting on his posts. The nerve. Who’s he think he is? Ken Jennings?

But I’ve never lost on Jeopardy.

So do you remember how he lost? What was the correct question?