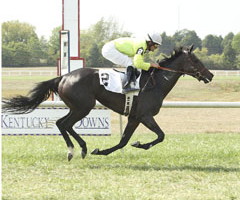 I’ve always wanted to say that and then cash a winning ticket.

“My horse came in.” That’s what you hear when somebody comes into some unexpected money. In this case it’s literally true.

I know a bunch of guys that went bought partial ownership in a race horse: Allinondeputyjin “out of The Deputy and Jin Mill” as a real race horse person would put it. “The Deputy was her daddy and won the Santa Anita Derby” one of the owners told me. If you look back a few generations, you’ll see some names you recognize as Kentucky Derby winners.

Whatever. Like most betters, all I care is where she was at the end of the race. As you can see from the picture, she won pulling away.

After the horse won, the owners invited their friends to be in the winner’s circle picture.

That’s cool. A once in a lifetime deal for me, you can bet on that!