A bunch of us volunteered to add a “three or four sentences” to a continuing story. It suddenly was taken way too seriously, and now there are long paragraphs being added.

I’m not going to read every word, but I’ll do a slow skimming until I get bored, and then I’ll add something at the end and pass it along to the next blogger.

I don’t know if the title is Splendid. 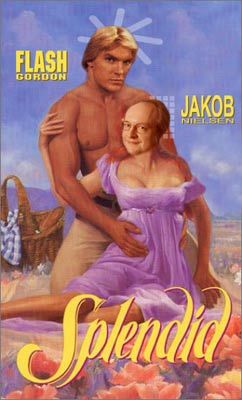 UPDATE: The title is indeed Splendid – with this great artwork provided by WriterChick
my apologies for messing with it.

That’s how it’s being referred to. So I even screwed around with the title. I’m sure this group won’t let me play anymore if I volunteer for the next project.

If it was me? The next project would be to write an instruction manual for a left handed Fourbesider with a built-in Hemingway.

Here we go.
MsMum
The curtains were drawn against the chill of an early winters evening. The only sound to be heard was a sigh as she poured over one of her interminable lists, this being for the coming weekends dinner party.
She was concerned how she would keep them apart after the recent unpleasantness.
It was unthinkable she not invite them both, but in doing the right thing by them, had created a problem for herself…..
Poseidons Muse
Drawing a soothing draught of red wine from her glass, she looked up from her list and stared across the room. A distant memory, like the transient flash of ‘his’ handsome smile, spurned her inner turmoil. She had developed feelings for Steven during her initial tenure at the University. Their first encounter seemed almost cliche. A fateful walk across an autumn campus, a stack of books falling upon golden autumn leaves, polite words spoken, lucid eyes meeting hungrily. Butterflies.
What had begun as an innocent friendship between colleagues (for Amy would later be introduced to Steven as a contemporary) later spurned into a brief, but torrid, romantic affair. When the couple resuscitated themselves from their grey moral vortex, they realised that they would make better friends than bed-fellows and had decided to remain in each other’s lives. Now, Amy had the task of playing chancellor and counsellor to her friend, as he struggled for a sense of equilibrium in his failing marriage. Once again, she sensed the butterflies.
Writerchick
Amy sealed both invitations, one for Steven and one for Margo, his estranged wife, and adhered a lovely tiffany art stamp to each. “I hope to God, they aren’t still arguing over custody of the dog or the chimp – helluva a dinner topic that will make.” She put the invitations aside for the post office run she would do in the morning and pondered the menu for the party. “Now what dish would both please Steven and compliment his lovely golden curls by candlelight – of course, curry!”

Reg
As Amy started gathering ingredients in the kitchen, she stared thinking again about Steven; his gorgeous eyes, his pouty mouth, his blindingly shiny blonde curly locks. “I wonder what conditioner he uses”, she thought to herself. She would have to remember to ask him when this fiasco with Lola was all said and done.
She went to the cupboard to grab the fryer pan and pots she needed to begin cooking for the party. Behind her, a soft voice with a light, almost playful, british tone spoke:
“Oh, dear, you’ll need a larger pot than that i’m afraid.”
Amy swung around fast. In the doorway to the kitchen was little Lola, complete with a little pink ruffled apron! Amy stood, stunned. Did the little bearded wonder just speak?
“I’m sorry?” she replied.
“The pot,” Lola said, “is not large enough. Do you have a larger one?”
Giggling, Amy stood there. She didn’t know what to make of this. A talking chimp? With a British accent nonetheless? How completely amusing, and mad! Just as she was about to respond, she dropped the fryer pan from her hand and it hit the floor with a crash.
Amy awoke, startled. Sweat beading from her brow. She must have fallen asleep on the couch. “What a vivid dream”, she mumbled to herself. She heard a loud bang coming from the kitchen. Cautiously, she grabbed the broom that was leaning against the wall and moved toward the kitchen doorway. Another bang. She jumped, then realized what the noise was. She had left the kitchen window open slightly and the shutter was banging against it. She felt a wave of relief and shut the window.
She looked the clock on the wall. 9:23a.m.. “Well,” she thought, “Now is as good a time as any to start preparing for this party.”
Amy started the coffee pot and began pulling the food and spices out to start her appetizers, and of course, the curry and roast she would be making. The scent of coffee filled the air and she took a deep breath.
“Things aren’t going to be so bad,” she thought, “Bearded babies are better than no babies. And certainly better than talking chimps!” She giggled at the thought of her wierd and vivid dream.
Just then, a knock at the door. She wasn’t expecting a visitor, or even Dan, the hairy, yet handsome parcel packageman.
She started to open the door when someone came bursting in and almost knocked her on the couch. She quickly recovered her footing. It was Margo, Steven’s estranged wife, and she didn’t look too happy.
“You WHORE!“, she exclaimed, bursting into the room. She was moving quickly toward Amy, waving her finger in her face. Amy was backed against the wall.
“Steven just told me everything! He was hoping that by coming clean, we could possibly give our marriage one more chance. I knew he was a dirty dog, but YOU, Amy? How could you do this? I confided in you, told you of the trouble our marriage was having, and THIS is how you ‘help‘? My God! You better start talking Missy, and you better start talking FAST!”
And now its my turn!
“Margo, sit down and SHUT UP for a moment,” Amy hissed at her. “What in the hell do you think you are doing, bursting in on me, screaming your fool head off at me?” she asked. She slammed the door, and moved behind the counter to get a cup of coffee, and catch her breath.
Margo, to her credit, did sit down at the kitchen table. The tension grew as Amy poured coffee into mugs for herself and Margo, and brought them over to the table. As she sat across from Margo, Amy took a deep breath, and readied herself for the conversation that was ahead of them. For a brief moment, she thought about the dinner preparations, but decided they could wait. This conversation was too important, given her news of the previous day.
Amy began speaking softly and quickly, “I knew Steven was going to speak with you, I knew he would tell you, but it was not so he could start again with a clean slate. It was to convince you that it was over, that he wanted to move on. “
Swallowing hard, Amy continued “What made you think I wanted to hear your ‘confession’ that day? Why did you think I wanted to help? I wanted to get out of the room as fast as I could. Your sad story would have broken my heart, if I hadn’t known the other side of the story.”
Stuttering, Margo tried to interject, “But…..I….”.
A bit stronger now, Amy got up from the table, “Margo, I do not owe you explanations any more than you owe them to me, but get your act together, and stop acting like a jerk.”
She walked back around the kitchen counter and began to page through her lists, getting ingredients organized in the order she would need them, totally ignoring Margo, who still sat at the table in stunned silence.
“Go home Margo, make some sense of the mess your life is in,” Amy counseled, “and don’t you ever come in to my house raging like that again.”
Silently, Margo slunk out of the house. Amy went to the door to watch her drive off, and closed the door. She leaned back against the door and feeling lightheaded slid to the floor.

“What next?” she wondered.

While she was sitting on the floor, she noticed she hadn’t run the Swiffer over it lately. When she got up, she banged her head on an open cupboard door, blood poured from the wound. She leaned back against the door and feeling lightheaded slid to the floor.

UPDATE: Turns out Swimming Upstream is Reg the writer before me. I’m so freakin’ lost. Can somebody get me out of this mess? I apologize to all the other posters. It should have been age before beauty in the pecking order.