If American citizens saw more pictures of soldiers coming home in coffins, the war would have ended sooner – and there would be more pressure now to end the war in Iraq NOW. 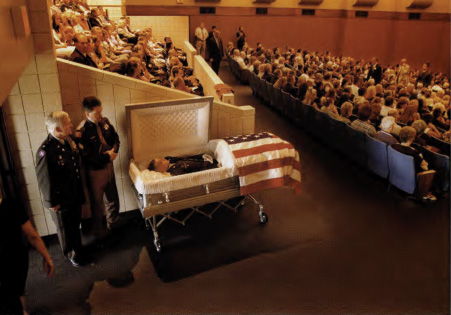 The Supreme Court just upheld a decision regarding the publication of the above photo by Harper’s Magazine.

This case concerns the publication of a photograph of the open casket of deceased U.S. soldier Kyle Brinlee in a photo essay by Peter Turnley that appeared in the August 2004 issue of Harper’s Magazine entitled: “The Bereaved: Mourning the Dead, in America and Iraq.” (Download a PDF of the article.)

Does it bother you to see a dead soldier and the hundreds of people who felt connected enough to the young man to show up for his funeral. Good, it should.

Our government has allowed the Defense Department to forbid the photographing of caskets arriving from overseas. It was initiated in 1991 to protect the privacy of grieving families. Of course this is ridiculous because all the caskets are closed and not identified in any way.

Those who remember the film, video, and stills of the dead being brought home from Vietnam will never forget.

Now we don’t see it. When we do, the family files suit to suppress the photograph.

Photos of coffins are surrogates for numerators in the Iraqi war equation. When they become larger than the war’s denominators, the public may come to clamor for an end to aimless American deaths.

I believe that to be true. Congress needs to eliminate this restriction on the press. Most of us are untouched by the war. Sure, we think about it and read about it but we aren’t personally connected to any of the dead soldiers. Photographs of caskets will help us connect.

Do you know how many U.S. soldiers have died since the beginning of the war? Even in round numbers – to the closest hundred?

Photographs can move a nation. It’s time for the Pentagon, Defense Department, or Congress to make the change and show all of us the truth – no matter how painful.