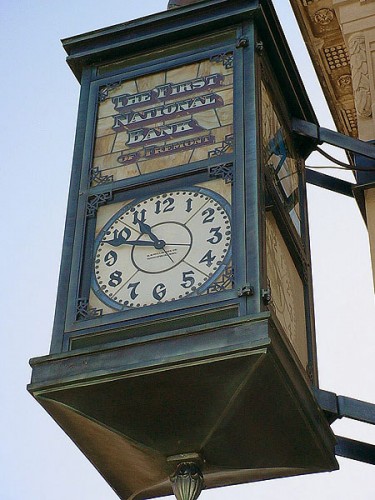 Sometime in the dead of night tonight or tomorrow night, zombies all across the United States (except the parts of Indiana that are Zombie Free Zones) Arizona, Hawaii, and most of Canada (except Saskatchewan – the capital of which is Regina, sounds like vagina – do they call it rajayjay now? Which is already “out” as slang because Oprah and the NYTimes used it) and turned this into one giant runon sentence.

I like daylight. I sleep when it is dark. I know there are people who are not like me. Screw ’em, if they weren’t willing to work at night, there would be no night shift. Every hospital would be more efficient because people would be sent home at 5 p.m. Crime stats would go down, because nobody would be arrested at night – no cops on duty. The economy would boom because factories would have to triple their capacity because everybody worked days.

We will never have year around daylight saving time because farmers don’t like it. Somebody told me why, but I forget. There also is something about country kids waiting at bus stops too, but I don’t remember that reason either.

So if I can’t remember, it can’t be that important. But politicians don’t want to piss of farmers and Moms. Forget about all the other regulatory crap they throw their way – “we can’t change to 365 days of saving light because of farmers and rural moms.”

So here’s the deal: everybody has digital clocks. Everybody. There are no more analog clocks in the U.S. (maybe in Floyd’s Knobs, Indiana there is one hanging outside the bank.) If I can’t have more daylight during the week, let’s have longer days on the weekend.  Clockmakers should make clocks that have 28 hours on Saturday and Sunday, starting at 9 a.m. the clocks slow down and at 2 a.m. they speed up.

If Google can put an ad on my site that changes because I am writing about clock time and not Time magazine, then they can handle making clocks for the U.S.

We should put Google in charge of this.