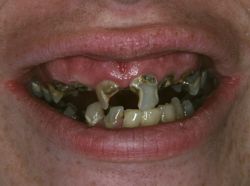 Kentucky is among the worst states nationally in the proportion of low-income residents served by free or subsidized dental clinics, and less than a fourth of the state’s dentists regularly take Medicaid, according to 2005 federal data. 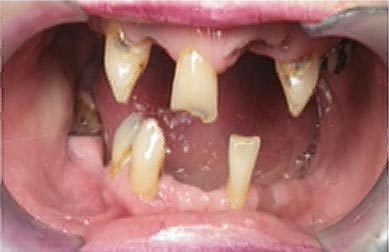 In 2006, Kentucky law enforcement seized 342 meth labs and made more than 32,000 arrests related to methamphetamine. The previous year, the Office of National Drug Control Policy designated Kentucky’s largest city, Louisville, among 23 nationwide that were hot spots of methamphetamine use. 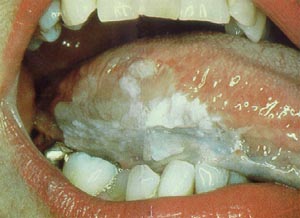 Kentucky also has the highest rate of cigarette smoking in the country and one of the highest proportions of chewing tobacco use. Smoking and chewing tobacco, which account for more than half of all cases of periodontal disease in the United States, often lead to oral cancer and can encourage the growth of the bacteria that erode teeth and eat away at the gums.

If you find that you’re having problems with your own dental health, it’s absolutely essential that you book in with a dentist who can help to rectify your situation as soon as possible. They’ll be able to offer fillings, root canals, a low cost tooth replacement option or anything else you might need to get back on track!

Kentucky’s senior senator is the minority leader of the Senate: Mitch McConnell. He is probably unbeatable because he is indispensable to the Republican party as a fund raiser. He faces little opposition in elections and has amassed vast amounts of cash and political IOU’s that he uses ruthlessly.

He operates on a national and international scale with little regard for his constituency.