Let’s elect a president with a fun name.

What a great name to chant behind the rope lines:

Ahnold saying his name would be boring however. Bahrock Obomba is Barack Obama. Pfffbbt.

I’ll give you more special interest groups: you supply their name for his first name.

Got any ideas for special interest groups that would rhyme with Obama?
Obama was born in Hawaii and there is no translation for African American. So he is ‘Ele’ele Pelekikena (black president) very similar to Merry Christmas in Hawaiian.

Aside: if a noose is a hate symbol, with the auction block also become one? Are bachelor auctions doomed? What if you have an African American bachelor? Well, that doesn’t make sense because a noose has no other use. Too obtuse. Aside over.

UPDATE: Barack has a serious problem with his name. It’s iambic. 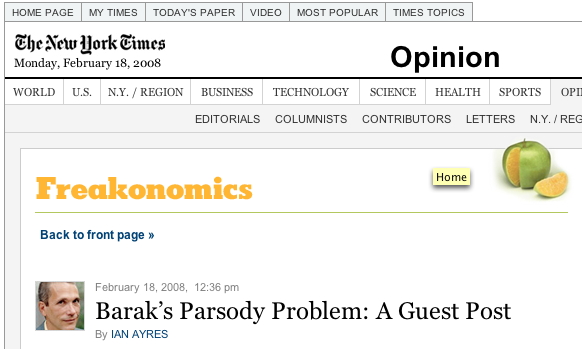 But not as serious as the NYT not spelling it right on their online edition.