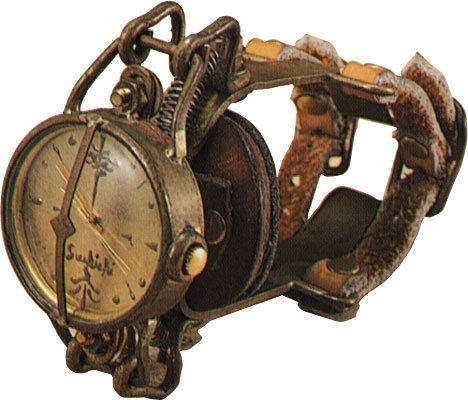 
Do you know about the Steampunk movement? It’s been around for a couple decades, so I’m not too far behind, am I? Steampunk is a spin off of cyberpunk or more correctly an antonym of cyberpunk. Think H.G. Wells and Jules Verne and Thomas Edison.

It’s the world we would be living in if computers had not taken over in the late 1980’s. Well to Steampunker’s fantasy beliefs it’s the world without computers. Everything is run by steam.

Steampunk is more than just brass and watchparts. It’s finding a way to combine the past and the future in an aesthetic pleasing yet still punkish way. It’s living a life that looks old-fashioned, yet speaks to the future. It’s taking the detritus of our modern technological society and remaking it into useful things. Join me as I search for items for my house that combine the scientific romanticism of the Victorians with our real present and imagined future.

Boy if that doesn’t describe we late boomers, nothing does. I think I’ll start working on a Steampunk theme for here.