It probably won’t. But we may be reaching peak speeds right now. Are you happy with the speed of your internet connection?

I don’t know anyone that would not like to have a faster, more stable, connection. But the success of the web is choking the tubes.

The telecos and cable systems are the enemy of faster download speeds.

The pending legislation and FCC inquiry are both good signs that the U.S. Government is getting involved, but we think more action is required, treating this need for enhanced broadband access and speed with the same urgency as the construction of the Interstate Highway System or the moon landings.

Unfortunately, when the web started, nobody could anticipate the impact it has on everyone’s lives. Imagine a world without the internet. Cities gave franchises or licenses to one company to provide the better alternative to dial-up, the cable television company. Those companies were very slow to offer faster speeds at affordable costs. They saw a new cash cow. As long as they held the franchise, they had an effective monopoly on most cities and towns. No other company can afford to make the capital investment.

So here we are, ten years later and we are falling further and further behind other industrialized nations.

Last year, by one estimate, the video site YouTube, owned by Google, consumed as much bandwidth as the entire Internet did in 2000.

Look at these average speeds… if you don’t know your download speed, try speedtest.net 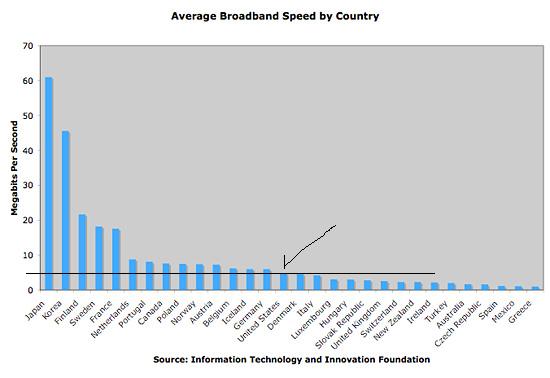 source
Yes, supposedly the most technologically advance nation in the world is in the middle of the pack for broadband speeds. Our arch competitor for technology, Japan, is thirty times faster. They have started building a space based system.

Individuals with 1.5-foot antennas can also receive a sizable boost in communications speeds through Kizuna. Those dishes will be able to receive information at a rate of 155 megabytes per second.

Cisco advocates a national policy of 100 mbps. That’s lower than we have now. Connect Kentucky, called the model for national broadband access is touting 200 mbps kbps (edited to fix error) as a standard. Caution: ConnectKentucky is so lame they have this linked to a pdf!

In a nutshell, here’s what ConnectKentucky says:

Utilizing what is becoming known as the Connected Nation model for technology expansion, ConnectKentucky has helped the Commonwealth become a national leader in technology adoption and planning.

Which is pure bullshit.

Here’s the deal. They define broadband as 200 mbps kbps. That means dial-up qualifies. They count a county as having high speed access if one zip code has one connection to high speed dial-up.


I like free enterprise as well as anybody. But progress means changing the way we do things. Privately owned water and electricity and water are a thing of the past.

Ownership of the access to broadband should become a public utility. Owned and regulated by municipalities it serves.

Meanwhile, the government is watching and listening to complaints of customers and users, but not doing much yet to stand in the way of the purveyors of Internet connectivity. Instead of expanding the pipes of the Internet, companies such as AT&T, Verizon, Comcast, and Time Warner have chosen to invest in acquiring smaller companies, amassing power and influence so they can dictate terms to the government and broadband users. They’d prefer to abolish Net neutrality and move toward a tiered service, vowing to control what we can see and hear on the Web, while leaving the services of competitors on a slower tier.

Kentucky’s senior senator is Mitch McConnell who has the ear of every important Republican. Telecos and cable companies are huge campaign contributors, as are the makers of switches, etc. ie: Cisco.

Who is looking out for our interests?

And you, I hope.
This is a grassroots deal. Read and learn. Write a post. It’s up to us to make the web stay vibrant.