In a caption with the image, Disney’s Hannah Montana star tells VF: “I think it’s really artsy. It wasn’t in a skanky way. Annie took, like, a beautiful shot, and I thought that was really cool. That’s what she wanted me to do, and you can’t say no to Annie. She’s so cute. She gets this puppy-dog look and you’re like, ‘OK.’

I hope Vanity Fair and Leibovitz get their butts hauled into court, along with her daddy.

Disney Channel also took the offensive by issuing a statement. “Unfortunately, as the article suggests, a situation was created to deliberately manipulate a 15-year-old in order to sell magazines.”

Well, duh. Thats what kiddie pornographers do. Manipulate and profit.

I feel so embarrassed,” she says. “I never intended for any of this to happen and I apologize to my fans who I care so deeply about.'”

UPDATE 2: Big Oops from the Disney Mousers. Seems they have a REALLY young kid all over billboards in China wearing a Mousy bra and panties. 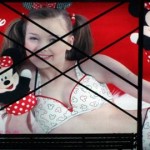 Staring down at the throngs of shoppers on Beijing’s Xinjiekou Nandajie Avenue, a busy commercial thoroughfare about a mile west of the Forbidden City, was a white girl who looked all of 12, reclining in a matching bra-and-panties set adorned with Disney’s signature mouse-ear design.