In high school, I had a blind english teacher. Miss Weckerly. In all the times I was making her life miserable, I never once thought about telling her “your outfit sucks.” I don’t know why that didn’t occur to me.
I was a rotten kid. She was a really rotten teacher who happened to be blind. The other rebels in class and I tested her every chance we got. As you might expect, she depended on her hearing to give her a clue to inappropriate activities, ie: screwing around. She could detect a moving object at thirty feet – about the size of a classroom.
If she thought there were some shenanigans, she would go charging down a row of desks hoping to intimidate the culprit or get a reaction that she could interpret as monkey-business.

The only thing my friend Brad could get away with regularly was removing her Braille dictionary from the shelves by him, and sit with his eyes closed and try to figure out the little raised bumps.

Eventually however, someone would notice him sitting there as if in a yoga pose, fingers moving slowly across the page, intense concentration marking his face. A silent signal would alert the rest of the class and the smothered laughter would get him in trouble. Miss Weckerly never knew what he was doing.

What made me think of this? This gadget: it reads the color.

Brad would have a great time with it. 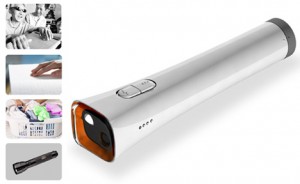