The Warren County Sheriff’s Department charged the duty of screening of citizens attending the Hillary Clinton for President Rally in Bowling Green, Kentucky decided four of these were deadly weapons and confiscated them. 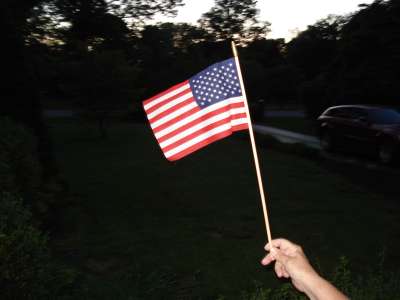 The sheriff’s deputy who was in charge of the security check point said the eighteen inch sticks would have to be removed from the flag.

We decided that we would let the sheriff’s department keep the flags because it’s hard to wave four 5 x 7 inch flags that aren’t on a stick.

The flags were rolled up by a deputy and placed on the GROUND.

Other than that, we carried in two fold up chairs, some blue Powerade, and a camera. As near as we could figure, the flags were the only confiscated items. We saw strollers, thermos jugs, thermos bottles, other bottles with liquids, those thick soled shoes the TSA hates, camera tripods, etc.

A good time was had by all.