We will soon be the proud owners of a Mach One spinning wheel.
After a week of complaining about sore ankles (!) Nancy has made enough revolutionary moves that she is committing to becoming an owner. The ankle soreness was from over-spinning or super-circulating the Mach One.

We have a dog or two that loves to eat wooden knitting needles. I’m concerned that they will show their dismay at being alone in the house they will decide to gnaw on the Spinning Wheel of Death if it is handy. 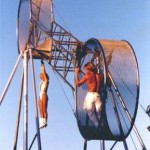 When I suggested this would be a problem, Nancy said she would use the other bedroom as long as she had a TV to watch. This means she would be in one part of the house spinning and I would be in another part computing. 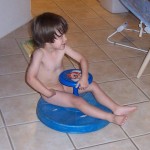 …while I compute. We would be accompanied by four dogs no doubt.  Did I mention this room is about 10′ x 10′? But it’s not like either one of use would be moving, except for her feet and my fingers.

I think it would be good preparation for living in “The Home.”

Probably not much of a chance of this happening since de-cluttering isn’t in her genes. I think I could convince her to move it from one room to another.

Now if we only knew a good place to get Irish wool. The Irish knitter in my blogroll gets her wool from Nepal. Go figure.

I’m hoping I will get a nice cardigan and some wool booties to wear at “The Home.”

Either that or it will be CSI: Our House.