Robert Rauschenberg died. I didn’t know anything about him. The news reports are calling him an artist.

Rauschenberg is recognized as one of the 20th century’s most influential and prolific artists. He is credited with bridging the gap between the movements of Abstract Expressionism and Pop Art. A pioneer of the “Transfer Drawing” process, he experimented in technologically sophisticated combinations of photographs and drawings. 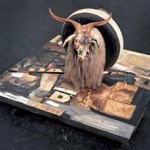 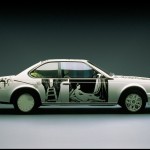 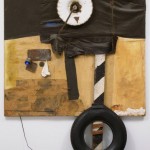 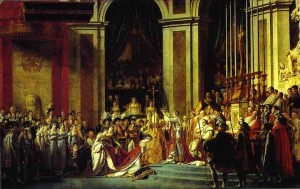 This happens to be my favorite work of art. Here’s why:
1. It’s immense. 20 feet high by 30 feet wide. 6 x 9 meters +/- for my international audience and grade school kids.

2. It tells a story. It’s called Coronation of Emperor Napoleon I and crowning of the Empress Josephine in the cathedral of Notre Dame in Paris on 2 December 1804. See, isn’t that better than Bob’s name of his stuff?

The goat thing is called Monogram.

Woo Hoo paint a car and speak French in describing it! ART! The painting with the tire is probably called Sounds Like Tuna.

3. It has faces. I’m not a stickler for art to have faces, heads, arms, legs, etc. Winged Victory is art and that’s a big hunk o’ rock carved into a headless feathered overwhelming sculpture. OTOH, that big hunk o’ steel in Chicago isn’t.

4. It has depth. I never understood the importance of seeing art in person. I’ve seen a goat and a car and a tire, so I don’t think Bob’s work would benefit. Even “regular” size paintings are better when viewed in person. But David’s art was spell binding for me. I was mesmerized by the feeling of perspective when I knew it was only paint.

This is where connoisseurship comes in, or even art criticism. What makes one Combine a masterpiece and another, in the same room, just some meaningless stuff?

If I have to have an art critic explain stuff, that just doesn’t qualify as art.

So there you have it. RIP Robert Rauschenberg, I’d love to see your grave marker. I bet it doesn’t look like this one in Père-Lachaise (St. Pete’s Lounger) in Paris. 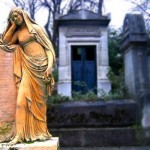