Speaking of Lincoln, what we need now is a John Wilkes Booth. Lincoln needs to die.
Obama says he would seriously consider killing him. And he’s the one that is in favor of change.
Kill the Lincoln penny. Kill the penny. Period.
I think Old Honest Abe would want it that way. He was a frugal guy, he didn’t like copperheads, (Democrats who opposed his policies.) Prawley didn’t like the snakes either.
He’s already on the fiver, has a wonderful monument in the District of Columbia, a nice likeness is carved into the side of a mountain.
I don’t think he’d mind if the U.S. pulled a Booth and killed the Lincoln penny. It’s scheduled for a “rear” lift to commemorate his birthday. I guess they are probably already being minted. 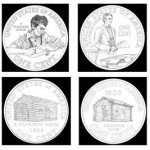 Only in America would a government pay 25% more to mint a coin than it’s face value. Congress is addressing the issue, debating a law that would substitute steel for the zinc and copper.

What do you do with your pennies? Save (hoard) them? So you got 1,000 pennies in a jar someplace. That’s 2 1/2 gallons of gas. OTOH, it’s 10 McDonald’s hamburgers. But we really don’t need the penny anymore.

You know who loves pennies? Zinc and copper miners, and the coin counter makers.

Obama has it wrong, we need is less “change.”