For my buddy, Suburban Hippie, and others who might wonder if there had been a third day resurrection.

Ok, I know I’m getting very snarky now, but puh-leeze can we stop already with Requiem O’ Timothy Russert?

Marshall Loeb, a financial guy, is using Russert’s demise to warn the Men of 58 to watch it or they could die next. Some did. Yesterday. No network TV guys though. 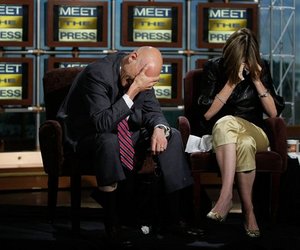 (actually they are crying on set at Meet The Press.) Peter Jennings got lesser treatment from ABC when he died because he was Canadian. You know, they don’t have a First Amendment there, so he wasn’t as important as Timmy.

Here’s another excellent point. If all the politicians loved the man…

How are viewers supposed to see NBC – or other networks – as impartial when they air segments with numerous politicians calling Russert their “friend?” Democratic presidential candidate Sen. Barack Obama issued a statement in which he said he was “grief-stricken” over the loss of his “friend.” “I was proud to call him a friend,” said the statement by Republican presidential candidate Sen. John McCain. Obama guru David Axelrod talked on CNN Friday and MSNBC Monday. He was a Friend of Russert, too.

It’s time. Let the Tim Russert Death jokes begin. As Suburban Hippie asked, where is The Onion when we need them?

NEW YORK–Three hours after placing Al Gore in the “dead” column, NBC News retracted its projection Tuesday, changing the vice-president’s status to “too close to call.”