Normally the only kind of flowers I like to hang around is Four Roses. This weeks Hot or Not Theme … no, that’s not it, it’s Heads or Tails… is Flowers. So immediately I think of Gennifer with a G spot Flowers. She was awfully quiet during the recent campaign. But now that ole Hill seems relatively harmless, she and Paula Jones have launched a new website to tell all. She’s the one that said Hillary was gay.
Gay flowers are always appreciated.
Better than cigars, eh Monica? Suppose if Flowers was asked if she had anything in common with Lewinski she would say “close but no cigar?”

She’s been hanging out at the Joint in Vegas (part of the Hard Rock.). Here’s how to find her. 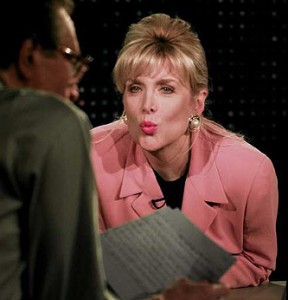