The twirp was arguing with me on the “Number One, Number Two; Number Three, Number Four; Number Five, Number Six” test.
Which is better, he would ask, and I would answer.
After I picked Number One, and when I picked Number Eight, I was aware that I had picked all even numbers. 2, 4, 6, 8 were all better than 3, 5, 7, 9.
He commented that I fell into a rhythm of always picking the second correction as being better than the first. Am I that cockeyed that I could be influenced by numerology of choosing eye correction? 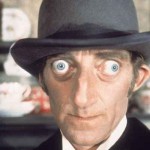 So we went through the test again, except this time, he said “better/worse.” Oh yeah, that really made a difference. I said “same” a few times, just to see if I could piss him off. Didn’t work.

So I changed things up. I would say Berse or Wetter, and let him interpret.

He kept saying “your first impression is best.”
I wanted to give him the stink eye, but I don’t think he could see it thru that gizmo. 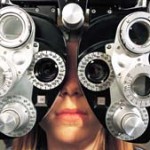 Flipping him off was not an option, he was a nice enough guy, but WTF? He challenged my eyes. He challenged my impressions.
I’ll get the glasses in about ten days. They are grinding a special lens to handle all the focals I need. We settled on quint-focals.
Luckily they will be spread over two pair of glasses.