However, the massive boobies are the result of a dangerous and disgusting-sounding procedure known as polypropylene string breast implants, where the aim is to continuously irritate the breast tissue so it fills with naturally-produced goo. 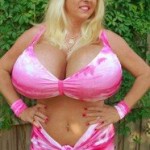 Representatives of the American Civil Liberties Union and the American Jewish Congress said they were considering suing the state over the plate. Neither organization was aware of any previous state that has approved a similar plate. A proposal for an “I believe” plate in Florida failed in April.

“What are you going to do, you gonna tell a fuckin’ story about that?” he growls. “Make it look like a commercial for an equal opportunity player? I’m not in that game. I’m playing it the way I read it historically, and that’s the way it is. When I do a picture and it’s 90% black, like Bird, I use 90% black people.”

The nomination of Barack Obama yesterday guaranteed another historic milestone. The next President of the United States will not be a Baby Boomer.

Mr. Gates stormed out of a meeting in a huff after a shouting match in which Mr. Ballmer jumped to the defense of several colleagues, according to an individual present at the time.

In fact, more than two-thirds of early Baby Boomer households, meaning those between the ages of 50 and 63, are financially unprepared for retirement.

All together now… well, no shit Sherlock!