Didja remember that Frida Lyngstad of ABBA was part of Hitler’s plan to populate the earth with Aryan children? The Jewish Channel did a documentary about it a few years back. Now with the resergence of the interest in ABBA because of Mamma Mia the channel is communicating to bloggers about the story and documentary.

If your cable system carries The Jewish Channel it sounds like a very interesting story.

“We were just young, stupid, and in love,” a Norwegian woman who had a love affair with an S.S. soldier explains. “We didn’t think about a pure race… To be honest it was that we thought they were really handsome in their uniforms. That’s the main reason we went out with them.”

Frida Lyngstad (center) didn’t know who her father was, but the story came out right at the time of her greatest success. 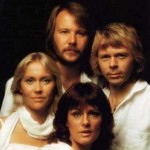 Decades later, with millions of dollars in lawsuits pending, the whole story is a huge embarrassment for Norway. One of the Lebensborn children puts it aptly: “And to think that Norway is supposed to be such a perfect country,” he says, recognizing that no nation is infallible and that we must all guard against prejudice and injustice, even where it’s least expected.