No really! Are you blind? Or maybe you know somebody is?

I want some honest feedback on what I think is more government wasteful spending on a “feel-good” public works project.

The city is rebuilding a lot of street crossings in our burg. They are installing these doo-dads on every corner. 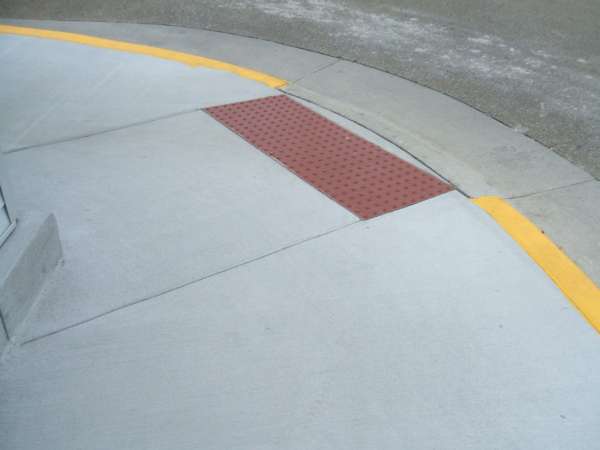 If you guessed it’s Braille for “Look Out You Idiot, Are You Blind?” you would be wrong. I was told that it is to alert sight-impaired folks that they have come to a traffic crossing. Whether it be a driveway crossing a sidewalk or a street corner. Kroger even has installed them outside the entrance to the store.

In a burg of 100,000 I wonder how many legally blind persons there are? I’ve seen one dude with a white cane walking. One. For sake of argument, lets multiply that by the government mandated multiplier for politically correctness: 100. So there are 100 people here. But lets say only 1/2 are mobile. 1/2 of those walk on sidewalks. So we’re down to… well a few more than one.

I’m probably a LOT insensitive to the blind, but the next time I see the guy, I’m going to run up behind him and yell “WHAT DO YOU THINK OF THE BUMPY CROSSING ALERTS?”

After he removes the white cane from my ear, I’ll ask him again because I really want to know if he thinks it is a good way to spend your tax money. (I stopped paying taxes a long time ago – JOKE, it’s a jokeNancy.) 🙂

Oh, yeah. Funding was cut this year to all non-profits because the burg needed to tighten their spending.

Just a half a block before the picture above I stumbled over this. 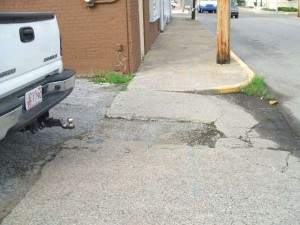