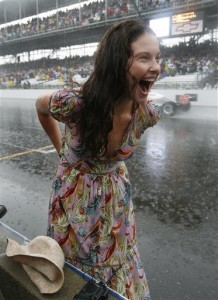 Ashley’s husband is an unemployed race car driver, having just lost his ride. So I guess she feels like she needs the money. Word has it he may launch Relaxi-cab in the U.S.

I understand the advertising/marketing people think we all want to look like Judd and Beckham (I would rather look like Beckham of course) but I have mirrors in my house. I know that if I wear Armani underwear, my dick abs/pecs/thighs/face will never look like that.