I owned two camcorders, before I thought I was getting my money’s worth. One was VHS and was so large it rested on my shoulder.

The second was the smaller size that is held in your palm. I remember we paid about $1000 for each of them. The first one is still around, as are all the video tapes.

(Remind me to show you the tape I took of an RC car running around our dirt backyard avoiding dog turds – from the ground level. Simply amazing video photography.)
When the kids graduated and left home, I basically stopped videotaping.

We took a road trip a few years ago, and I thought it would be cool to release my documentary dork. So I bought another palm camcorder.  It lasted about three days. As we were riding up the tram to Pikes Peak, the camcorder fell out of my pocket and broke the zoomer.
I paid to get it fixed and used it once and put it away. Then we moved. Now I can’t find it.
No, it’s not lost. I paid a thousand bucks for it. It’s not lost.

I’m don’t have a dork side. I just want plug and play. Or plug and poke around and figure it out. Help, tutorials and manuals are for dorks.
When I saw the Pure Digital Flip Video at Target, I thought it was pretty cool. It’s about the size of a deck of cards and it is bare-bones video. But it’s pretty amazing for $150 (at the time) now you can pay the same and get basically the same features in smaller package, or pay about $100 for what I bought. 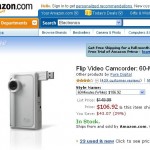 click to enlarge
It’s pretty cool because all the software needed to download the video is built-in.  Just plug into your computer USB port (the rectangle one that the connection is always upside down.)

The drawback is that every time you stop the video, it creates a file, so there is no continuity. It’s great for Youtube stuff!


It’s just so plain-jane I can hardly stand it. Definitely no cool factor. But it sure is functional. It has a nice zoom which can be adjusted to zoom fast or slow, the viewing screen is bright, and it’s a one button deal. It’s digital tape. It also has a port for an external microphone which I like when doing my Dorkumentaries. 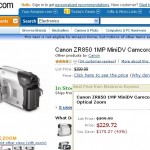 The newer model Canon ZR850 is $230. Buy a tripod or monopod for $30 bucks, a wireless mic for $30 and you got everything you need to make a Dorkumentary – except the makeup.

The controls are very intuitive if you are used to a game-boy toggle. Push up to play, right to fast forward, left to fast backward, down to stop/pause.

It has some digital effects, but don’t screw around with them. If you really must make everything Sepia, do it using the software that comes with the cam.

The record button is kinda awkward because it’s operated by your thumb and you have to hold your thumb at an odd angle.

For geezers with the shakes (like me) having a palm cam is a nightmare. Unless you are totally still, elbows locked to your rib cage, or braced against a pole, forget about getting shot that isn’t shakey, especially if you need to pan. Buy a tripod or monopod, even if it’s a tiny one. 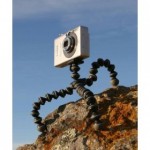 I prefer the monopod because panning is much easier.

Next time I’m videotaping, I think I will drag out the monster camcorder – it looks much more official. I could duct tape the little Canon to the side and nobody would be the wiser.