Miss USA chose a large audience to demonstrate her love of science – especially physics. Following up on last year’s contestant in the Miss Universe pageant, Rachael Smith, Stewart decided that education our children is more important that winning some stupid pageant.

So she fell down. On stage. In a dress. During the pageant.
After all, Miss South Carolina Teen has all the map needs for the world kids covered. There is a need for more physics education.
So in just a few seconds she demonstrated:

However, it appears that the new Miss Universe, Danaya Bana Bo-bana, from “oil-rich-Venezuela” told host Jerry Springer that she had a new physics theory that she was studying.

The Size of the Eyes is Directly Proportional to the Size of the Surprise: Do Winners Really Practice Their OH Faces Prior to Pageants? 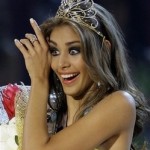