Despite what our friends Varley and Chickie swear, the moon doesn’t shine out Brett Favre’s Ass. He is still the whiney crybaby he was when he retired. He boo-hooed his way through his first retirement press conference, took his football and went home.

When the press didn’t follow Brett Favre’s every move off the field during his retirement, he announced his comeback. But he sure didn’t want anything to do with the cheeseheads that worshiped the gouda he walked on. 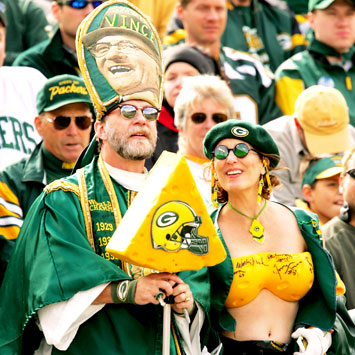 Fans waited for Brett Favre at the entrance to the players lot at Lambeau Field on Monday, but he avoided them by going through another entrance.

Another professional sports team in Milwaukee that plays with a small round ball, found some heat. The Brewers players, obviously with their minds completely on the game before them, were disagreeing over Favre’s antics.

“I was just saying that Favre should have put the team before himself through this whole mess,” said Parra, a second-year pitcher, “and that he should have handled everything a lot differently. The next thing I know, Prince just lunges at me like I’m the last vegetable pakora at an all-you-can-eat Indian buffet.”

Meanwhile the poor schmoe that had a job and probably will lose it, and be known as that-guy-between-Favres, had a Green Bay welcome.

Aaron Rodgers was welcomed with all the warmth and patience that one might expect from the down-to-earth, dairy-loving folks of Wisconsin on Monday; he was booed back to the Stone Age.

Don’t you just love “professional” sports? If only they could be played without people. 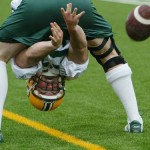 SURPRISE (not) UPDATE: Favre takes football and goes home – AGAIN. Get thee some Wellbutrin, O Lord of the Tundra.

UPDATE: Can you believe this is still timely? Favre plays. Quits. Wants to play again. I should have bought the domain name BrettFavreForeverFootball.com