The Coen Brothers are just weird and they write weird movies. You have to be weird to come up with Burn After Reading.

This movie is worth seeing just to watch Brad Pitt totally transform himself from Mr. Macho into Pee Wee Herman. If Angelina has this effect, she is off my list. But he stole the show.

Taking the limelight from George Clooney and Frances McDormand is no small task, but with one word repeated many times in a hilarious context sealed the deal.

Nancy reminded me that Clooney and Pitt are buds off screen, so the outtakes of this movie might be worth getting the DVD when it comes out. 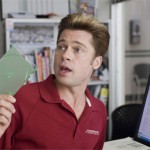 Pitt is a guy who comes into possession of some secrets, McDormand wants plastic surgery, they try to leverage their possession into loot. Somehow Clooney gets involved.

I didn’t think it was as funny as those around me. I laughed in spots, chuckled in others, and was shocked (imagine, a Coen movie that has a shocker.)  The movie changed from odd characters doing odd things, to events that were just so… so… weird!

In Burn After Reading, I think the joke is on the audience. We paid good money to watch a script that could have been written on a Sunday afternoon.