Did you cry when Old Yeller died? This means absolutely nothing to anyone born before 1950.

I was ten when Old Yeller came to the movie theater. The Dawn Theater in Hillsdale. “Ice Cold Air Conditioning” was their tag line in every ad and above the marquee. Maybe Jannawill let me know if it’s still standing. Har. The movie starred Tommy Kirk (now 66), Fess Parker (Davey Crockett! Daniel Boone! now 84), Chuck Connors (The Rifleman! dead) and Dorothy McGuire (dead.)

I cried when Old Yeller died.The video is a parady. The kid didn’t shoot his bro, he shot his dawg.

Here’s where to get the video so you can traumatize your grandchildren.

And now the town of Mason, Texas celebrates this heart-warming event every October.

Set in the 1860s, Old Yeller was inspired by a true story told by Gipson’s grandfather and recounts the frontier adventures of a teenage boy, Travis, and his poor family who adopt an ugly “yeller” dog. At first, Travis hates the thieving stray that devours their last chunk of meat. The boy’s heart softens, though, when Old Yeller saves his little brother from an angry bear. The story’s most memorable scene unfolds when Travis, heartbroken but mature beyond his years, must shoot his beloved dog, after it’s bitten while fending off a rabid wolf.

But what is wrong with the boys in Mason, Texas? They let a GRRL win the look-alike contest? 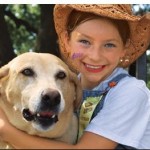 Hell, the dog is prawley a bitch too.

Shoot ’em both – right between the eyes. Unamerican.

I bet they don’t even show the movie at The Odeon Theater, either. Unamerican.