The economic meltdown of the national banking system is well underway and at every turn, we are being reassured that everything will be OK.

If this one single fact doesn’t scare the hell out of you, what is wrong with your noodle? This doesn’t make me feel better: 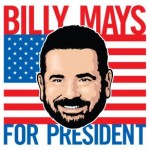 Dude can sell anything to anybody.

Now the assholes in Congress are bickering and have voted against the plan everyone said HAD to pass today.

So Obama, McCain and Biden will probably withdraw and let Sarah Palin woo the white haired guys on the hill. Did you hear her with Couric – she had all the sound bites – and like SNL said, she looks adorable.

If she took Hillary as a running mate, they could get it done. Either one could de-nut congress. Sarah Palin with a Moose-gutting knife, Hillary with a withering look.

Me? I’m just looking for a place to run and hide. Southern Canada or Northern Mexico or Costa Rico are looking pretty good.