I moved from Pop a state to a Coke state, never lived in a Soda state. Yet since Coke is so dominant in the restaurant biz, fast-food or other, it not really a problem to ask for Coke in Kentucky because 99 out of 100 times, they don’t serve Pepsi. (Ask Nancy, the High Priestess of Pepsidom.)

I grew up in Michigan and as you can see it is thoroughly “pop.” “let’s go for a bottle of pop” “get me a pop, will ya?” “You want some pop?” Yeah, pop, definitely pop. Pop in Michigan would include Vernor’s Ginger Ale, which back in the day wasn’t available nationwide. I recall having to tote a case of Vernor’s to Seattle during the World’s Fair so my Dad could park in a former Michigander’s driveway.

And just up the road a piece is the home of Ale 8 1 that comes in a six pack.

Here’s the map of soda vs. pop vs. coke. 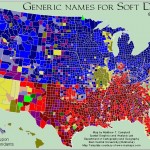 You agree with this assessment?

If you want a county-by-county analysis, click here, and then write in fifty words or less why you care.

What sayeth the international readers? What do you call the brown carbonated sugar water?