Financial advisors should ALL just STFU. What possible valuable advice could they offer that is valid, pertinent, or useful when the whole U.S. economy is in the middle of a major shit-storm?

I didn’t want to own a tri-initial mega insurance company. But taxpayers (and that’s me) now own a part of AIG. No, wait, it was a loan from Bush and his Capitol Hill cronies, so taxpayers didn’t get equity, we got a promise to pay. Whoop!

The biggest brains in the world of economics said five years ago: stay the course, we are in a correction, keep saving, keep investing, keeping paying those 401k fees and bank fees. Keep subscribing to on-line advice mongers like Morningstar. Keep subscribing to Money magazine and the ilk.

And she openly admits that even she (who told The Times Magazine that she wouldn’t care if she lost a million in the stock market) has to be cautious with her money:
Anything is possible in life. … I have millions and millions and I am still saving.

I don’t have children of my own

Now if you have your retirement saving under control and there’s more money left to invest,… (save for kids education)

but now is actually a pretty compelling time for you to start investing. I am not saying we are at a market bottom (no one can make that call with any certitude right now), but with stock values already taking such a big hit, you have a chance to start your investing at lower valuations. And assuming you are talking about long-term investing (my definition is a minimum of 10 years), you can buy low(er) today and have money in the market for when we turn the corner.

Woo Woo! The past ten years, the S & P has increase 18%. Not 18% a year – 18%! Lousy Eighteen Percent. We are in such deep shit now that the next ten will be worse. How can it be better? Will McBama flip a switch and stop the war, get us off oil, get U.S. manufacturing back in order? Uh, no.

Do I have an answer? No. But I don’t take money from people and pretend I can give them advice that will be worth more than consulting a Magic Eight Ball or the local Madame Diane, Princess of Palms.

I really, really resent it when rich people tell us unrich people how to live our lives. I don’t want to hear from Orman, Ramsey, or the CNBC OctaBox (as Jon Stewart called it – when seven talking heads aren’t enough.) 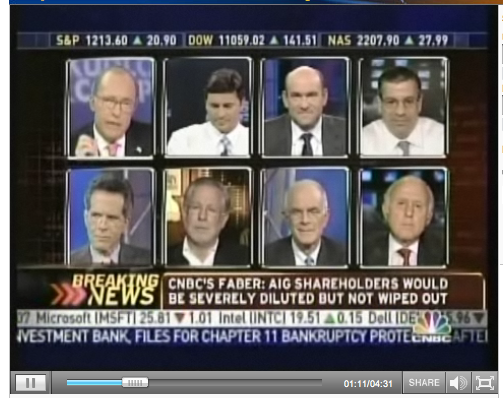 I don’t even want to hear from The Fly at IBankCoin.com (the name I told him he should buy – well a very similar name, that he NEVER GAVE ME CREDIT FOR SUGGESTING.  Pig.)

So financial advisers should all just STFU for about a year – no wait, make that like FOREVER.

Yeah, I’m generally pissed off that ten years ago I was told by a financial adviser I had a real shot at retirement.

No, the money isn’t gone, I have more now than I had then – about 18% more. I was told was to expect 7% more every year for ten years. That was prudent – cautious – reasonable.

That would have doubled my money. Instead, I got a lousy 18% more.

By working another seven years, to age 67,  I could have tripled my money. That would mean a working retirement might have been doable – if I didn’t live too long.

McCain: the fundamentals are strong?

Yeah, if you have oinked out at the government trough long enough it might seem that way.