You no doubt have your Halloween costume all ready to go, perhaps even have worn it once already. Nancy is wearing hers today to bowling. She is going as Dorothy from the Wizard of Oz. There is only one reason for her choosing that character: Toto! She is putting Sofi in a basket to be her Toto. No pix yet, but soon, I’m sure. 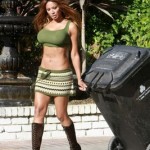 2008 version of Dorothy and Toto? An early halloween costume? A zealous trick-or-treater?

No, this is Traci Bingham. If you need to enlarge for “details” just click away.

When I saw this picture I was struck by one, not two ideas. Well OK, two, but not the two obvious ones.

1. Why is she dressed like this to take out the trash?

2. Why is she taking out the trash?

I Google ™ searched her and found this to be her career so far (she’s 40).
Movies

Then another question pops up.

How can she afford to have trash? I did a quick calculation and figured that after taxes a career like that would give her a net income of about $37,793 total. This doesn’t include other “off-the-books” income of course.

Answer: she is married to a banker.

Which raises another question: a banker??? a banker??? How proud he must be to take her to the annual Beverly Hills Bankers Ball.

But I’m really puzzled over the original two questions. The second more than the first. Those are probably the only clothes she has that fit so she has to wear them to take out the trash.

So why is she taking out the trash? Doesn’t she have “people” to do that? I would. As a matter of fact, if I was rich, I would have a person who would be a live-in and be at my beck and call strictly to do chores like this one. Nancy could have one too of course. I think in our burg we could get a nice, dependable, couple to live in our Maison De Woofhaus for 100 grand plus medical. When we are traveling, which would be a LOT, they could take that time off to recover from our exhausting demands. But when we are living at our Sedona ranch, they would be expected to come along with us – coach of course.

Here’s an example of some of the duties my “people” would be expected to do for me:

Hmmm, that’s not a very long list. After all, we would have a cooker-person and a cleaner-person.

Doesn’t Traci have these people?

I think she needs a hug.