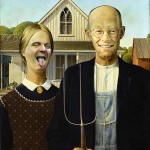 I’m talking about Joe the Farmer. They work hard, they play hard and they don’t make a lot money. Don’t worry, this isn’t a sob story for how hard the American farmer has it. They usually love the life and usually do well enough to support a family.

This is about the dairy farmers (all of them) that let the American Dairy Association take money from every pound of milk they produce. (uh-huh, milk is sold by the pound from the farm)

It’s about the Got Milk advertising campaign.

The ADA gets money from every farmer right off the top. The farmer never sees the money. It’s called a “check off program.” Pork and beef farmers have the same program. When the farmer sells product, the buyer retains a portion of the proceeds and sends the money to the trade association.

Campaign by the Federation of American Bics. 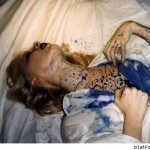 Milk consumption – all kinds and forms of milk – has fallen steadily since 1945. The campaign was launched in 1993. It’s one of the all-time stupidest advertising campaigns ever. Ignore the bad grammar. It has extremely high memorability scores, and is a landmark when a star or celeb is chosen to appear wearing a stupid look and a stupid photo-shopped milk moustache.

But it doesn’t work. 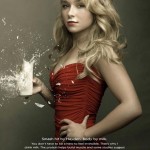 The celebs that participate in the Got Milk campaign are unbelievable. And I mean, not believable. If they were eating brie, chugging a amaretto and cream, or downing a Ben and Jerry’s, OK, maybe believable. But a glass of milk? Nope. No way.

Despite some fringe groups claims, milk is good for you.

Why doesn’t the American Dairy Association tout these advantages? It’s all about the marketing officer getting to hang around photo shoots with the stars and celebrities, I’ll guarantee it. It has to be. Otherwise why, oh why, would an association keep spending millions and millions of dairy farmer’s money for nothing to show for it?

It’s the biggest con job ever. American dairy farmers can be as gullible as any of us. $175 million.