Nothing has changed regarding my decision not to vote for president, since I live in a colored state. Firmly colored. My vote doesn’t matter. As a matter of fact, the last few weeks have solidified my decision. Neither candidate has said anything other than “maverick, maverick, maverick” or “change, change, change.” I’m really pissed at the negative campaign distortions by both parties. So my colored state will remain firmly red.

Yes, I plan to vote. I have a few local candidates I want to vote against.

But because I live in a fully colored state, my vote for president doesn’t matter one little whit. Unless you live in one of these states where the election is still a toss up, your vote doesn’t matter either.

Because of the electoral college, there are no more landslides. There are only stateslides. Candidates are measured by the number of states that voted for them. We don’t even get to pick the electors. 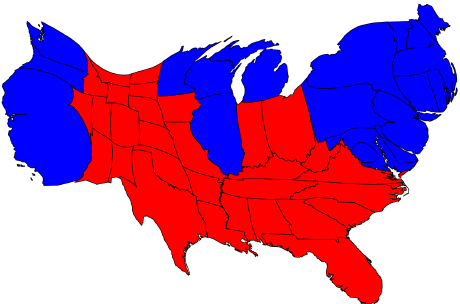 Here’s a map indicating that my state doesn’t have nearly as much clout as those itty-bitty states up in the upper right hand corner.

Obama barely set a toe in Kentucky. Same with McCain. We’re in the bag for McCain.

My state is so firmly red that it doesn’t make any difference if independents vote. None.

Abandon the electoral college? No.

Not yet. But we’re close.

When Bush lost the popular votes but the Florida Secretary of State declared Florida for Bush, the electors gave him the office.

For those of us in the colored states it’s pretty much a lost cost to cast a ballot for President. 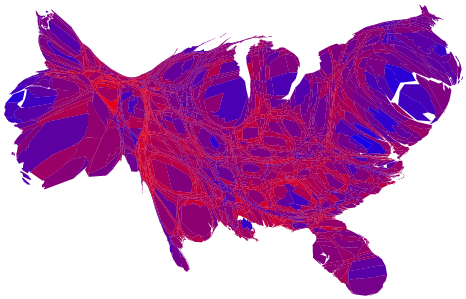 Yeah that looks about right – it’s a freakin’ mess.

I think there’s a better way. But the way we pick our presidents will never change. I’m OK with that, just don’t expect me to vote as long as I live in a colored state.