I’m all about the freeconomy – companies trying to earn my loyalty and my future business by giving me free stuff. There are some awesome blogs that keep me up to speed on what the freeconomy is up to. Passwird, Bargainist, and MyGoodCents are good blogs that are in my RSS that I read daily for free stuff. These blogs offer other “deals” but I’m mainly trolling for free. There is a bunch of similar websites, but no RSS, so forget them. I like these. I’ve scored some good free stuff, a bunch of tee shirts (that are too small after one washing), sample size products, trees, some expensive Schick Razors, and other stuff.

Note: don’t mess around with the sample shampoo and conditioner. They come in single serving foil pouches and are impossible to open with wet hands. Don’t think you can bite them like you do single serving saltines either! Ptooey.

From time to time, I’ll run across and offer that is so good, it’s as good as free. For example, Leading Hotels of the World tried to run a promotion to sell hotel rooms at five star resorts for $19.28 per night for a two night stay. After browsing some stunning resorts, we picked Enchantment Resort and Mii amo Spa
as our first choice, with a Santa Fe resort second and I forget our third choice.
What a cats-ass-trophy!

In a nutshell, their servers crashed immediately denying access to everyone. After two weeks of emails explaining, apologizing, re-explaining, and revamping, they ran the deal again and we didn’t get any of our choices after three weeks of hoping.

I won’t spend $500 a night on a resort. Just don’t see the value. But when it’s hanging out there seemingly ripe for the picking, and you get a chance snag one only to find out the insides are rotten, it’s pretty disappointing none-the-less.

So Misleading Hotels of the World is on my dethpickable list.

They are trying to give away free Dr Pepper. Except their site is inaccessible.

UPDATE: Toad ya. See that space in the lower left? that’s where the free Dr Pepper offer used to be. They called in some code slave to remove the offer. 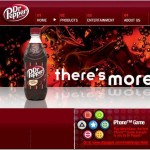 Offer extended! “Everyone in America has until 6 PM EST on Monday, November 24 to get a free 20 oz. Dr Pepper.”

UPDATE 3: Good point by a commenter on another site: “Everyone” IF you have a computer and internet access.”