Newspaper columnists are not good bloggers. Unless the newspaper columnist is independently wealthy and only writes a  column and is syndicated for real pay, a newspaper person just can not crank out the volume to really be called a blogger. By volume, I mean at least one post a week. Now to many, this is just ludicrous to consider that one post a week is my standard. Many bloggers crank out multiple posts per week, some multiple posts per day.

See? What newspaper columnist would get away with a convoluted run on sentence like that. 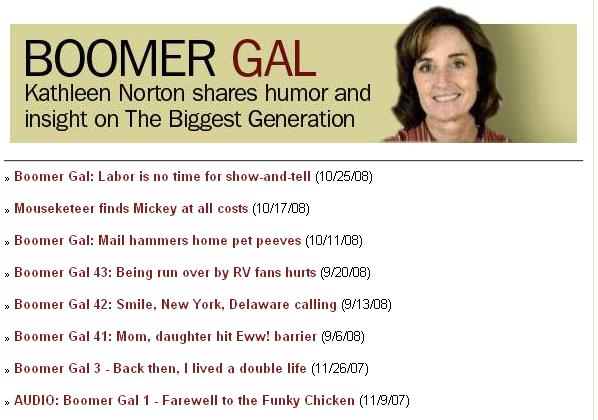 Kathleen Norton’s column is syndicated by Gannett News Service and she was recently named the Erma Bombeck Writer’s Workshop “Humor Writer of the Month.” Her column is broadcast on WAMC, Northeast Public Radio, and Norton teaches at both Vassar College and the state University of New York at New Paltz.
Contact her at: knorton@poughkeepsiejournal.com

But she’s apparently written seven posts in about a year. It’s right there. I read it on the internets.

She can’t say she “shares humor and insight on The Biggest Generation” (love the Title Caps!) and only write seven times a year. C’mon. It’s just this kind of malarkey that gives boomers a bad name! I’m calling her out because newspaper columnists are used to it. Just don’t write about Christmas Sweaters.

And – AND – she doesn’t write on a site with an RSS feed. What is up with that? Yeah, yeah, syndicated means you get paid and if I can get it free by RSS, I prawley won’t buy a newspaper to read your column, which I won’t do anyway because none of the papers that carry your column are sold in my burg.

Newspaper Boss to Editor: Blogs. We need blogs, but try to keep the costs down.

Editor to Managing Editors: Blogs. We need blogs, but we aren’t paying anything because it isn’t in the budget.

Managing Editors to Reporters: Blogs. We need blogs. We won’t pay you anything, but we’ll send your column all over the country and you might win an award and get on public radio.

Reporter to Underpaid teacher: Blogs. We need blogs. I have the perfect deal for you since you only have two jobs already, please write something we can put in the newspaper. Yes, it’s like a columnist except its a blog. The difference? We pay columnists, usually $5 a column. Bloggers get paid by Google. Except in your case, you don’t even get Google Ad Sense dollars. You get Fame. And Fame. And probably some irate phone calls and emails.

Yes, part of the reason I am calling her out is jealousy. On my best day, I get 400 readers. On her WORST day, she probably has a few thousand.

She is a newspaper columnist.