We’re all writing books! Well, those of us writing blogs are writing books. Was this in your plans when you started blogging? Are you writing another more traditional manuscript hope someday it will be published. Would you like to see your blog develop into a book? Here is your encouragement.

Head Rambles is off to the printers! 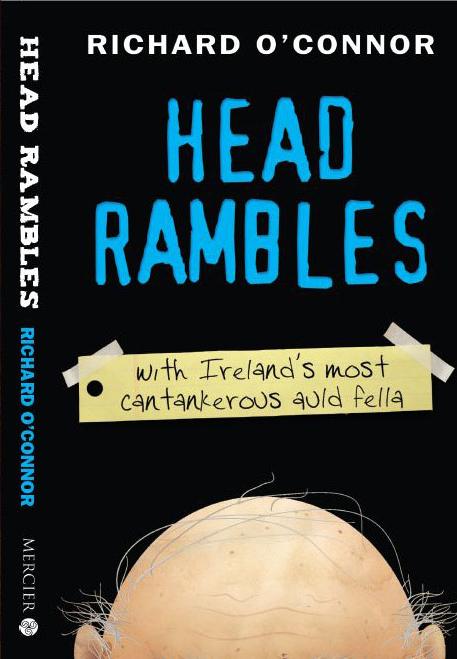 UPDATE: I was under the impression that this was Grandad’s novel. As he points out in the comments, this isn’t it. This is a true blog to book, which is even more outstanding!

I started reading Head Rambles soon after I started blogging. I fell over Grandad outside the pub in the village where he likes to have a pint more than occasionally. I met Herself, Sandy, K8, Wouldye, and other virtuous companions. Others, not so virtuous, come and go on a regular basis. His commenters are as entertaining as Grandad.

He is fond of sending American tourists (easily identifiable because they always have sunglasses on the top of their head) “to the bogs” if one should ask him directions.

His conversations with his laptop are poignant and often pointed. He has a point of view about life in Ireland and has won some prestigious awards and has been the subject of many newspaper articles, television stories, and I suspect a few scrawled notes hanging from poles (maybe even Poles) in the village.

He is quite the sportsman too. Regularly taking potshots at passing tourist buses.

The gunfire sounded interesting, so I went down to the village to get the paper.  Sure enough, the villagers had caught themselves a tourist bus, and the tourists had tried to take refuge in the church.  That was foolish, because everyone knows our church is closed on a Sunday.

So I racked up my score a bit, and went home.

His appeal to me was firmly locked in when I learned about his love of golf, his love of dog turds, and the clever way he interacts with his neighbors.

Out with the golf clubs.

I had a fine time.  Most of it was Wouldyapoo, because Sandy is discreet and only craps next door, and Wouldyapoo is large and weighty. 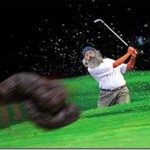 Apparently one of the young women was just about to go in the back door, when a rather large turd splashed across the door in front of her nose.  It was unfortunate timing.

There’s more, much more, on a regular basis. Get Grandad’s email updates or put him in your reader. You won’t be disappointed.

I’m can’t wait to lookat the pictures in the book. I’ll probably read some of the words. Since I’m a blog reader, not a book reader, I may find myself just reading a page a day. Unless the words are really large to bulk the book up to 192 pages. I am concerned that Homeland Security will declare Head Rambles subversive and I will have to elicit my friend Bill to smuggle a copy into the U.S. for me. Lucky for Bill, he likes to wear sunglasses on his head and loves to visit Ireland. He may be able to secure an autographed copy – or at least one with a bullet hole.

So here’s the deal with the book:

The original idea was to do a compendium of posts – a sort of “Best of Head Rambles”.  But by the time I had weeded out the too topical, the insane, the libelous and the blasphemous, I was left with about two pages.  I think Mercier expected a bit more than that?

So the idea of the novel was born.  And a novel is a different thing altogether from writing a blog.  A novel requires characters, plots, a start, middle and an end.  It requires a storyline, and all of this has to be worked out in advance.

Grandad has also been reading up on book marketing. Back in May, he teased us with this post…

The bottom line is that the book I have been working on has been put off.  It won’t be published for a couple of years, if ever.  It’s not that the publishers aren’t happy with it – it’s because I’m not happy with it.  They say it needs a bit of polishing – I say it needs rewriting from scratch.

Six months later it’s off the the printer!

So there! You budding authors/screenwriters (you know who you are) be encouraged. If

Ireland’s most cantankerous Auld Fella can get a book deal, you can too.