Suppose Detroit could make a car that would seat four comfortably, buzz down the highway at 80 mph easily, and the engine had just seven moving parts?

They would have built the DKW. 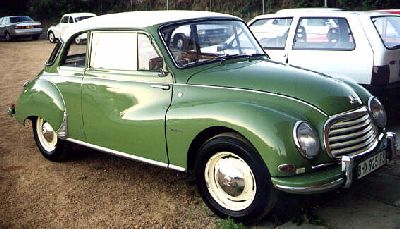 My brother had a DKW.  It wasn’t the puke green shown above, it was red. 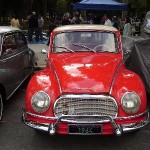 Amazing how much better it looks in red.

The DKW was a fun car given to my brother as a high school graduation present in 1961. (The last “upside down” year until 6009!)  He didn’t get a brand-new one, but it was close. My parents asked me for my input.  The choices were: an older car + cash to fix it up, or a “foreign car” as my dad put it. I didn’t see the car before I said to go for the foreign car. I was thinking along the lines of an MG. 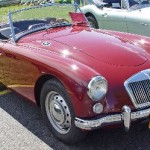 DKW stands for Das Kleine Wunder. The Little Marvel. It was an odd car. Fun. But Odd. The nickname for the car was the Deek.

And yes, the engine had seven moving parts.

How do I know it will cruise at 80 mph? Because that’s how my brother drove. 80. All the time. Remember the song “Nash Rambler?” Or the sound from the Road Runner cartoon? That was the kind of horn it had. I heard it a lot. My brother would tailgate the heck out of somebody (runs in the family) and just beep-beep-beep and yell at the car ahead until he could pass them – sometimes on the right on a two lane highway.

He went off to the army and my dad drove the car back and forth to work. I also drove the crap out of that car. The Michigan winters had taken it’s toll and a lot of the floorboard was rusted away. Dad threw down some steel plate to keep the weather out as best he could. My cousin and I usually ended up hill-climbing at the gravel pit.  Sometimes driving forward up the hill, but usually backwards because of the front wheel drive. It like to hill-climb in reverse better.

My brother drove 80 until he died. In a car crash. He had a Corvair Monza. 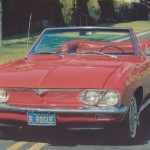 He got his red sports car and it killed him. He lost control on a long sweeping curve across from the cemetery where he is now buried.  He was probably going 80 and the rear end swung out and he smashed into a tree – actually backing into it almost perfectly. Except he was going 80.

It was the car Ralph Nader said was Unsafe Any Speed.