It’s not easy to draw an editorial cartoon about 535 people of different sexes, races, ages, experience and stupidity. This guy nailed it.
Mike Thompson is the cartoonist for the Detroit Free Press, my newspaper while living in Michigan. 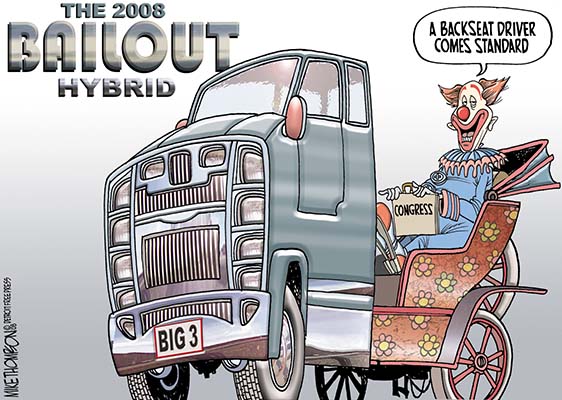 There was a rule of thumb that if you lived in Detroit or it’s suburbs, you read the Detroit News. We outstaters read the Free Press.
It started when I was a kid.
The Free Press was delivered to Allen by Greyhound bus – only on Sunday. The bus would roll by the tiny general store (equivalent of a 7-11 now), barely getting out of the traffic lane on US 12, and the door would swing open and out would fly a roll of about fifty newspapers.
Jeez, I wish I could remember the name of the guy that ran the store, that’s two names I can’t dredge up!
Anyway, we “reserved” a newspaper every Sunday. Since the store was not too far from the Allen Methodist Church, it was a stop on our way home.
I would go in and on the counter would be the newspapers neatly fanned out with names written at the top of others who had reserved a newspaper.

It was the first paper that had a “must read” columnist. I forgot his name, but he was a sports columnist. Fantastic writer. I’m pretty sure he’s dead. The Free Press (great name for a newspaper BTW) also is the home of Mitch Albom. I never was a fan of his – even less now that I see his blog consists of one post! ever! (probably not his blog, but it was first on Google.)
I kept reading the Free Press regularly on Sundays all through high school and picked up the local newspaper reading habit too. When I got my first job in Bay City, we subscribed to the Free Press and got real home delivery!

Somewhere along the line, some marketing dope decided that the newspaper should be referred to officially as the Freep. Their website is Freep.com. Stupid branding for a newspaper that is 177 years old. Appealing to the “yutes” I guess.

And now, home delivery of the Free Press is drawing it’s last breath.
On Monday it is expected that the Free Press will announce that they will only deliver the Thursday, Friday and Sunday editions. Details are sketchy.
I’m not too sad about the deal. It’s just one of those life moments when something you think will never happen in your lifetime, does.
Detroit still qualifies as a major metro area – where you can’t get daily home delivery of the major metro area newspaper.
And we move on.