In a Trillion Dollar world, we don’t care much about millions anymore. Nothing costs or is worth a million. At least nothing that makes the TeeVee news, except for million dollar bras. But we all know that the real news always involves billions. So why are reporters and anchors and pundits still popping the B in billion?

Phil LaBeau (above) was on NBC Nightly News – not to single them or him out – and he was a B popping fool!

If you don’t know what “popping” is, it’s putting heavy emphasis on the B in Billion. Just watch LaBeau in the link above. After the commercial it’s at :45 where his face almost explodes. Then the package rolls and he reappears live at 3:00 and explodes the B again!  It happens at least once a newcast.

And OMG, don’t even tune into a financial news network. Those people, of all people, should know that a million is insignificant. Even for a cable financial news show, which most don’t have a million viewers. But there is Bee popping going on all over the place!

Further proof: Google ™ news search on million and you get:

Results 1 – 10 of about 1,011,493 for million. Bah, hardly a mention in the Google search world. It’s not just old farts like LaBeau who pop their Bees. Youngster reporters pop their Bees too.

Now you will not be able to watch the news anymore without listening for Popping Bees. So please join my windmill attack: 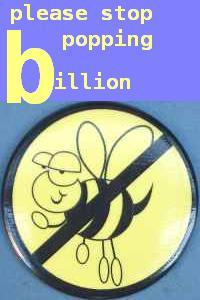